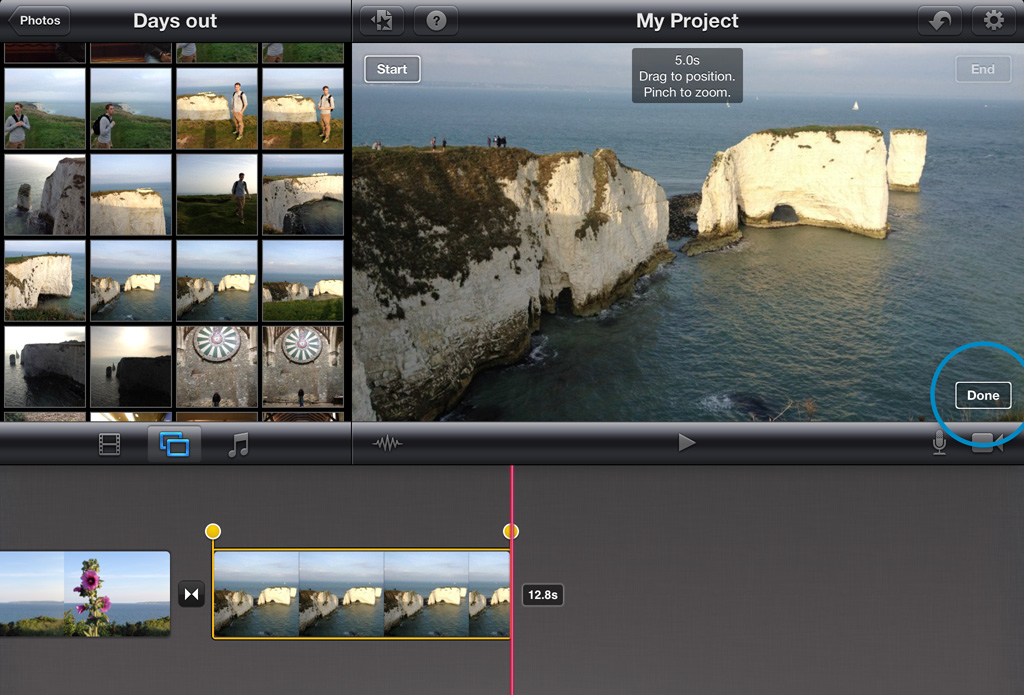 If you’re creating a holiday or social event video, then chances are you’ll have a lot of photos to use. That’s because stills are easier to capture in those spontaneous, spur of the moment events. People are also more comfortable posing for a photo than a video clip.

iMovie makes it easy to add photos to a project, it even adds a Ken Burns effect that slowly pans and zooms through an image. In this tutorial you’ll discover how to add a photo, then edit or remove the Ken Burns effect if necessary…

Ensuring that your project is open, scrub along the timeline using your finger to where you wish to place the photo. If the playhead (the red line) is located over a clip, then the imported image will appear before or after the clip depending on the playheads location.

Tap on the Media Library button, then select the Photos button at the bottom of the screen. While navigating photos, you can tap and hold on an image to preview it.

3. Add it to the timeline

Once you’ve found the correct image, add it to the timeline by tapping on it. The image will appear as a clip 3-6 seconds in length. Scrub along it and you’ll see a Ken Burns effect has been added, which slowly zooms and pans.

You can edit or remove the slow zoom by editing the photo. To get started, tap on the photo in the timeline, then tap the Start button that appears in the top left corner of the preview window.

Use your fingers to pinch, zoom and pan the image to where you want it to be located at the start of the shot, then tap the End button in the top right corner of the preview window.

Next, use your fingers to zoom and place the image where you want it to be when the shot finishes, then tap the Done button. You have now set the start and end point for the Ken Burns effect. iMovie will automatically animate between the two.

To remove the Ken Burns effect, ensure the start and end positions are identical. This is easily achieved by fully zooming out and panning to a corner of the image. Once confirmed, tap the Done button. The photo will now be stationary throughout the clip.