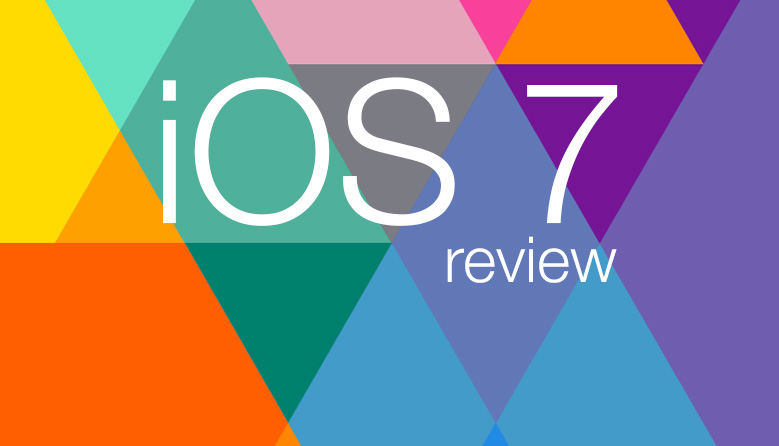 iOS 7 represents a bigger change to the iPhone and iPad than any previous hardware update. It massively changes the look and feel of every device, and introduces a wealth of new features and improvements. Can it compete with the latest software from Google and Microsoft? Read on to find out… 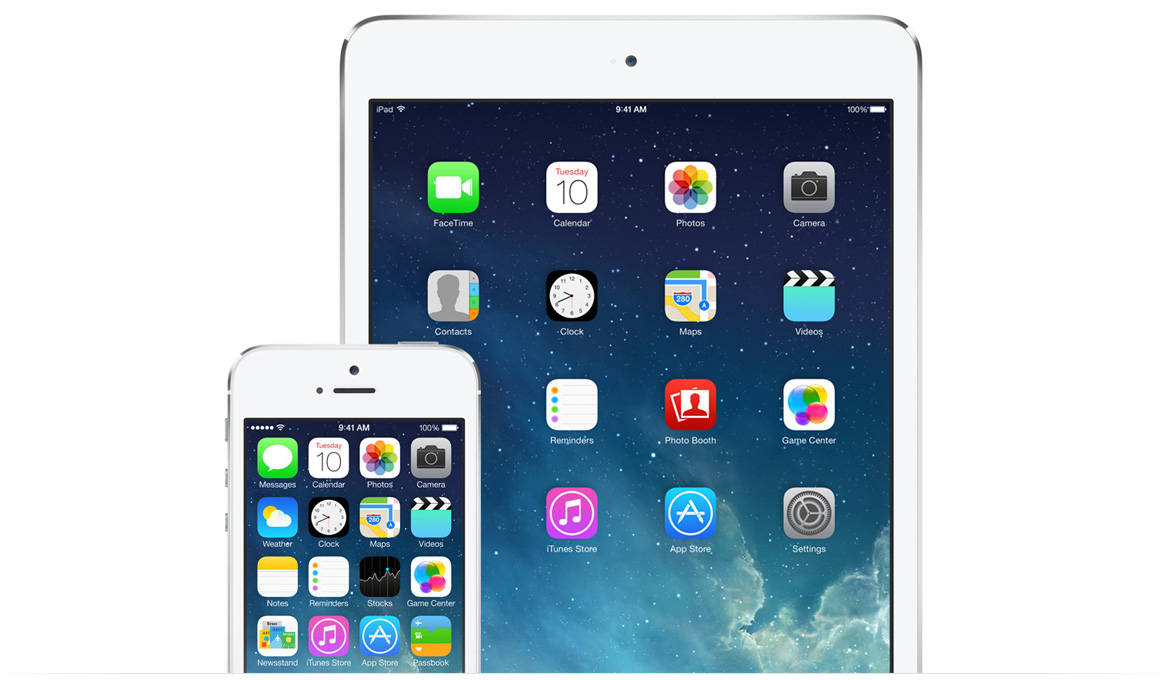 A brief history of iOS 7

Before iOS 7 was announced in May 2013, designers described the iPhone and iPad user interface as dated and long overdue an overhaul. The use of skeuomorphism had slowly crept into every corner of the operating system, and was seen at its most prominent when Game Center was revealed alongside iOS 5 in 2011. The Game Center interface featured a felt-covered table with mock gambling chips. It was a far cry from the colorful 3D graphics seen in games representative of the time. Other examples of skeuomorphism in iOS included a fake notepad in the Notes app, a fake book with digital pages in the iBooks app and a fully rendered compass in the Compass app.

The champions of skeuomorphism were Steve Jobs, CEO of Apple, and Scott Forstall, Senior Vice President (SVP) of iOS. Forstall led the development of iOS from its very first incarnation, and worked diligently to ensure the operating system was easy to use – even if that meant including mock visual elements such as stitching and brushed metal textures. Shortly after the release of iOS 6, Forstall left the company and was replaced by Jony Ive, who took over many of his responsibilities. You should be familiar with Jony’s work. He’s the lead designer of many Apple’s biggest products, including the iPhone, iPad, iPod, iMac, MacBook Pro and MacBook Air. These products eliminate clutter and unnecessary features and are beautifully simple to use. With Jony now in charge of both software and hardware design, Apple finally had a chance to create a unified and coherent design language across all of its products.

iOS 7 is the first result of Jony Ive’s approach to software design. It features a brand new interface with elegant fonts, bold colors and a lack of clutter and ornamentation. It perfectly mirrors the simple design of both the iPhone and iPad, and even takes cues of the hardware its installed upon.

iOS 7 is a complete re-think. It’s about making things simpler. About making it more fun to use iPhone and iPad. About showing elements only when they’re needed, in just the right place. That means more colorful icons and backgrounds, and more animation and physics to bring the operating system to life. iOS 7 introduces an entirely new design for iPhone and iPad. Gone are textured folders, static backgrounds and gradients. Instead they’ve been replaced with translucent elements, layered menus and playful animation.

Here’s a quick checklist of other new features you expect to find:

The biggest change in iOS 7 is its new look. There’s a heavy use of bold colors, and a substantial amount of white space which results in an airy, calming feel. Instead of opting for drop shadows and textures, the design team at Apple has introduced a layered, translucent effect to menus and the keyboard. That means when you slide Notification Center down the screen, it’s still possible to see your icons and background wallpaper below. This type of layering usually creates problems with text readability, but iOS 7 heavily blurs the content beneath. This ensures menus and text is always readable.

iOS 7 comes alive with animation. Menu elements bounce and slide to your touch, the background wallpaper respond to your movement and folders zoom in and out when opened. Everything has motion in iOS 7, bringing the user interface alive for the very first time.

These elements are governed by a complex physics system that takes gravity and movement into consideration. So when you flick Notification Center down the screen it hits the bottom hard and bounces back up. But when you carefully let it go the Notification Center panel falls gracefully and lands with a subtle bump.

The combination of color, translucency, animation and physics combine to create a stunning new look for iOS. Until you get your hands on it it’s difficult to appreciate just how much of a change iOS 7 introduces. Perhaps most importantly it makes using iOS a fun and inviting process. 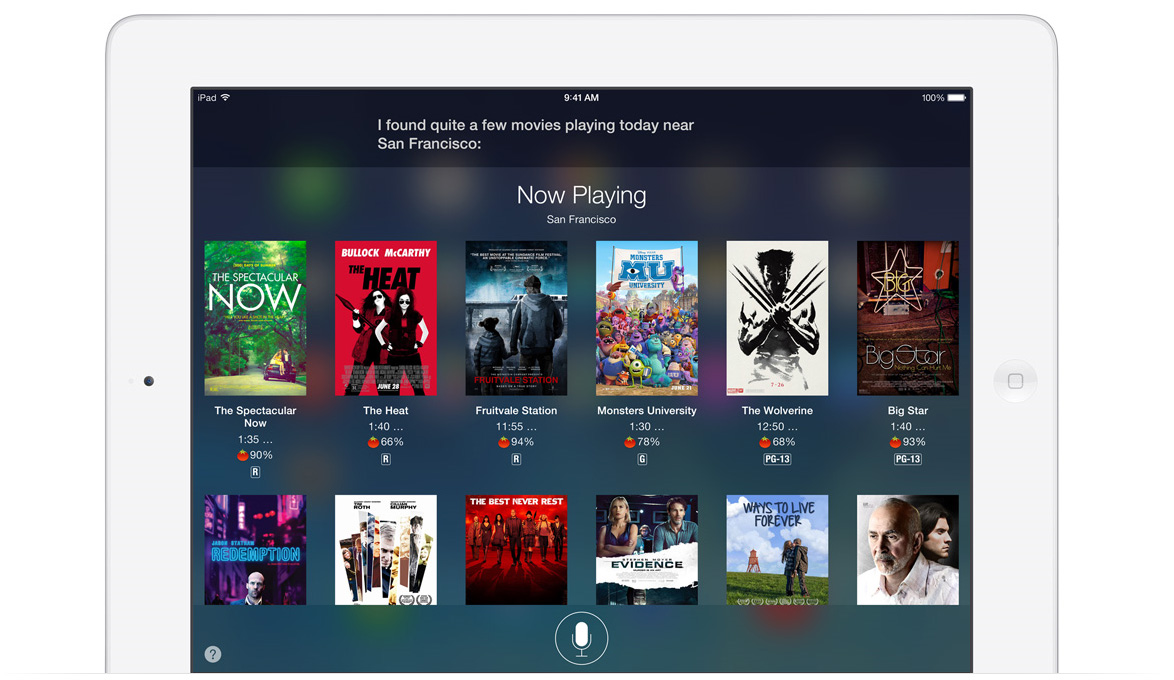 iOS 7 includes some great new features, such as Control Center for toggling hardware and software features, AirDrop for sharing files and smarter multitasking for jumping between apps. It also has a brand new Photos app, iTunes Radio, a revamped Siri interface and much, much more.

One of the biggest additions to iOS 7 is the Control Center. Accessed by swiping your finger up over the screen (even on the Lock Screen), Control Center displays buttons for toggling essential features such as Airplane Mode, WiFi, brightness, AirPlay and music playback controls. It features the same translucent background as seen elsewhere in iOS 7, so changes appearance depending on the content behind it. Control Center is a great new addition; one that will actually see regular use.

Siri sees a few additional features. The first are two cleared voices (male or female), making it easier to understand what Siri is saying. iOS 7 also introduces the ability to turn off features such as Bluetooth, as well as automatic searching of Bing, Wikipedia, and Twitter.

This sees a modest update. The same features as before are still present, such as live weather and stock updates, but now Notification Center will alert you of any events lined up for that day. These include appointments, birthdays and travel arrangements.

A very welcome feature taken from OS X, AirDrop enables you to share files with contracts nearby. Just tap the Share button and you’ll see the avatars of friends and contacts appear on-screen. Just tap on their face to instantly transfer a document or image to their iOS device. It’s that simple. AirDrop is a great replacements for third-party solutions such as Bump. Here’s a quick video we put together demonstrating how it works:

Every stock app has been updated with new interfaces and icons (see here for icon comparisons). They’re genuinely brilliant, introducing new features and controls throughout. Safari sees a cleaner interface with a combined search and address field, and it’s now possible to go back and forward through pages by swiping from the sides with your finger. The Weather app now displays the conditions outside in animation form behind the text. Notes gets rid of the faux notepad look and replaces it with a sleek, clean interface. The App and iTunes stores are smoother to navigate, the Compass app looks amazing, and comes with an additional level meter. We could go on for quite some time listing all the improvements. Needless to say, upgrading to iOS 7 is worth it alone just to experience the new apps.

iTunes Radio is a brilliant way to listen to streaming music catered to your own tastes. Not only can you choose from your favourite genre, but you can also create stations based upon artists and albums. It’s currently limited to users in the US, but expect to see it rolled out across the world soon. 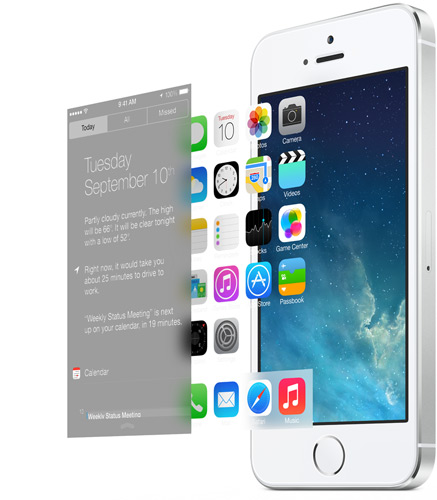 iOS 7 promises a bright future for Apple and its mobile devices. This is a sleek new operating system with a bold design, and biggest change to the iPhone since it was originally announced in 2007. Upgrade as soon as you can. iOS 7 is , and a very welcome update to the iPad. It’s sleek, bold design is eye-catching and modern, and the new features serve to only make life easier and simpler. iOS 7 is the epitome of everything Apple represents, and it lays down an exciting roadmap ahead in software development.